Sant Shiromani Narahari Sonar or Narhari Sonar (literally Narahari the goldsmith, a name often used in English sources) is a 13th-century Hindu poet-saint of the Varkari sect and goldsmith (sonar|sahukar| seth|soni) from Maharashtra, India. His hagiography speaks about his transition from a staunch Shaiva (devotee of the god Shiva) to a Vithoba-worshipping Varkari after a miracle that makes him realize that Vithoba and Shiva are one and the same. 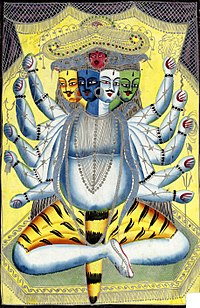 While Narahari Sonar touched the image of Vithoba (left), he felt as though he was touching the image of the five-headed Shiva (right).

Narahari Sonar’s chief hagiographical account is found in the Bhaktavijaya by Mahipati (1715 – 1790). Narahari Sonar was a staunch Shaiva (sect which considers the god Shiva as the Supreme Being), who lived in Pandharpur, where the chief temple of Vithoba stands. Vithoba is a form of the god Vishnu and the patron god of the Varkari sect, part of the Vishnu-worshipping Vaishnava sect and a rival sect of the Shaivas. Narahari Sonar worshipped at the Mallikarjuna temple, the Shiva temple located in the southwest part of the town. He is described as “bigoted” and “fanatic”. He worshipped only one god, Shiva. He never visited the famous shrine of Vithoba even once and even refused to look at the shikhara (pinnacle) of the temple.

The merchant brought Narahari to the sanctum of Vithoba’s temple, while people on the streets mocked Narahari’s blindhold and his beliefs. Narahari touched Vithoba’s image and felt as though the image had five heads and ten arms. The image wore serpent ornaments around his neck and matted hair on its head. He wore tiger and elephant skin garments and his body was covered in ash. Narahari recognised the iconography of his patron deity Shiva and removed the blindfold to see him. However, he saw the traditional form of Vithoba: a two-armed, arms-akimbo god standing on a brick in silken garments and gold finery.In disbelief, he blindfolded himself again and touched the image. Again, he felt as though he was touching an image of Shiva, not Vithoba. He realised that Shiva and Vithoba (Vishnu) were one and the same. He removes the blindfold and embraces Vithoba’s feet. He sings a panegyric in honour of Vithoba, equating him with Vishnu and Shiva alike. Narahari becomes a devotee of Vithoba and joins the Varkaris, preaching the oneness of God.
R. D. Ranade records that Narahari lived in Devagiri (currently known as Daulatabad), before moving to Pandharpur. A staunch Shaiva, he was influenced by the Varkari saint Dnyaneshwar (1275–1296) and others to become the devotee of Vithoba. He died in 1313 (Shaka 1235)